In the shadows of victory... darkness festers. The Borderlands have fallen, the populace slaughtered, enslaved, or conscripted into a dreadful regime spearheaded by a monstrous tyrant. Raise a rebellion to liberate the Borderlands in a new Seasonal Campaign, and stop the world from falling into tyranny in climactic Territory Wars at the end of the season.

The age of heroes is over – it’s time for rebels.

In the shadows of victory… darkness festers. A powerful, terrible man was rumoured to be amassing power in the leaderless vacuum left by the war for the North. The world had shown him no mercy, its ruthlessness begat his ruthlessness, and he made it his mission to rule over the land that had rejected him. Now, the Borderlands have fallen, the populace slaughtered, enslaved, or conscripted into this tyrant's dreadful regime. The monster would not stop until every village and even the legendary Conqueror's City was under his control. But sometimes, evil cannot be cut down by the sword and shield of a lone hero. The people of the Borderlands must rally under one banner and rebel against tyranny!

Territory Wars have formed the most important end-game content in Conqueror’s Blade for eight Seasons, but they haven’t been without their issues. With the release of Season IX: Tyranny, Territory Wars will be changing for the better. With the Tyrant’s armies on the rise threatening the Borderlands, we will be making significant adjustments to how these server-wide PvP battles work, especially for newer players.

One of the first improvements to Territory Wars in Season IX will include a revamp of the Prestige system. Prestige will no longer be the currency that Houses can exchange for actions, but will instead be a rating of that House’s growth. A House with high Prestige will gain the authority to command forces in battle. A House acting as the Ruling House will see their Prestige take a hit if the war ends in defeat, if they throw the battle, or if they simply escape.

Actions that increase a House's Prestige will include:

Actions that reduce a House's Prestige will include:

Declaring legitimate wars will no longer reduce your Prestige. However, excessive declaration of wars and unrestrained expansion will reduce it.

Area Influence will also no longer feature in the reformed Territory Wars. Instead, the right of command will be bestowed upon Houses that have declared war based on their Prestige.

Along with the changes to how players participate in Territory Wars, we will also change the way NPC Houses (Cohorts) engage in battles for their fiefs.

During Territory Wars, the leading Alliance of each region will battle within their zone of command by attacking enemies nearing their fiefs to protect their territory, or by seeking expansion. They will also seek Alliances with nearby friendly forces.

Warlords of the Imperial Restorationists may send their own forces to bolster their allies to take out their foes' fiefs, or strike against the player-controlled Houses. If their war rally is successful, the leading force of that Alliance's army will command the next fief battle and lead tens of thousands of troops in an assault.

Once a war rally begins, the leading force will request aid from the Imperial Restorationists. Leading forces will issue war rallies against nearby fiefs within their zone of command, and once Warlords of the Imperial Restorationists (or others thirsty for war) join in, the war rally's target is set. After a period of time, the allied army will march toward the fief.

Naturally, player-controlled Houses are bound to respond upon seeing such a vast army on the march. They might come from any direction to strike at or prevent the allied army from advancing. Once the army reaches the fief, it will begin erecting simple siege camps and preparing artilleries.

Should player-controlled Houses fail to prevent the army from finishing their preparations, the leading force commanding the army will become the commander of the next siege battle for this fief. They will then earn power over that region's people.

With the pastures for their horses and agricultural industries depleted, the Outriders must fight back for the sake of their precious mounts, and their lands and livelihood.

Armed with explosive throwing spears and the power and speed of launching attacks on horseback, these strong soldiers excel at destroying opponent formations. The Outriders’ spears can also break ranks with ease, laying waste to enemies of the rebellion. Attacking from horseback comes with its own set of turbulent challenges, but the power of the throwing spear cannot be underestimated.

Civilians often have to answer the call of war in history, whether by conscription, enlistment, or in this Unit’s case - survival.

In the wake of a famine wrought by a diabolical tyrant, armies rose across the lands from the most unlikely of places. Some members of this troop chose to follow the tyrant, while others became mercenaries, with no choice but to fight for their livelihoods. The Axe Raiders, humble people of farming and woodcutting backgrounds, repurposed the tools of their trade to become a formidable fighting force against the new evil spreading through the Borderlands.

Utilising their axes as even deadlier weapons capable of piercing armour and impeccable self-defence, these improbable soldiers will use every skill in their arsenal to deter the bandits and defend their food and lives.

These well-equipped ordnance experts possess high-precision firearms in the form of elite muskets. Thunder may appear to roll across the battlefield, but it is actually the sound of the Shenji Grenadier’s weapons clapping.

Along with their powerful muskets, the Shenji Grenadiers live up to their incendiary name with bomb-throwing skills that can cause blast injuries to any foes in their wake.

We initially revealed Shenji Grenadiers as a Unit that we intended to have joined the Unit Tree during Season VIII: Dynasty. Though it’s taken longer than expected for these Eastern warriors to gain some traction, we’re happy to announce that in addition to being unlockable via Seasonal Challenges, you will also be able to unlock Shenji Grenadiers using Honour via the Unit Tree later in Season IX.

With the launch of Season IX: Tyranny, we’re changing the way weapon skills work. Skill Pages will no longer be required to unlock and upgrade ultimate skills. Instead, they will now be unlocked with Mastery Points.

As Skill Pages will no longer be needed to unlock ultimate skills, all Skill Pages spent on unlocking them in previous seasons will be returned, and a Skill Page Exchange Event will begin (check the items you can exchange by clicking ‘O’).

During the Skill Page Exchange Event, players can change all previously spent and all currently owned Skill Pages to the following:

Gaining Honour is one of the most prestigious things a Warlord can do in Conqueror’s Blade, and accumulating it contributes directly to unlocking units in the Unit Tree.

In Season IX, there will be a few adjustments to how you create your elite army.

Crafting and forging equipment often proves difficult for some players. To aid this endeavour in Season IX, schematic types will be merged with new items.

All Uncommon and Rare weapons schematics will be merged into a single schematic (and the same goes for armours).

Schematics in your inventory will be changed to the corresponding replacements and sent to your Mail.

The final changes for Season IX: Tyranny come in the form of Unit adjustments to leadership and balance.

Leading on from this, we know some 5-Star Cavalry Units are struggling in the current meta. Changes will be made to address this, specifically when it comes to the Kheshigs and Cataphract Lancers. 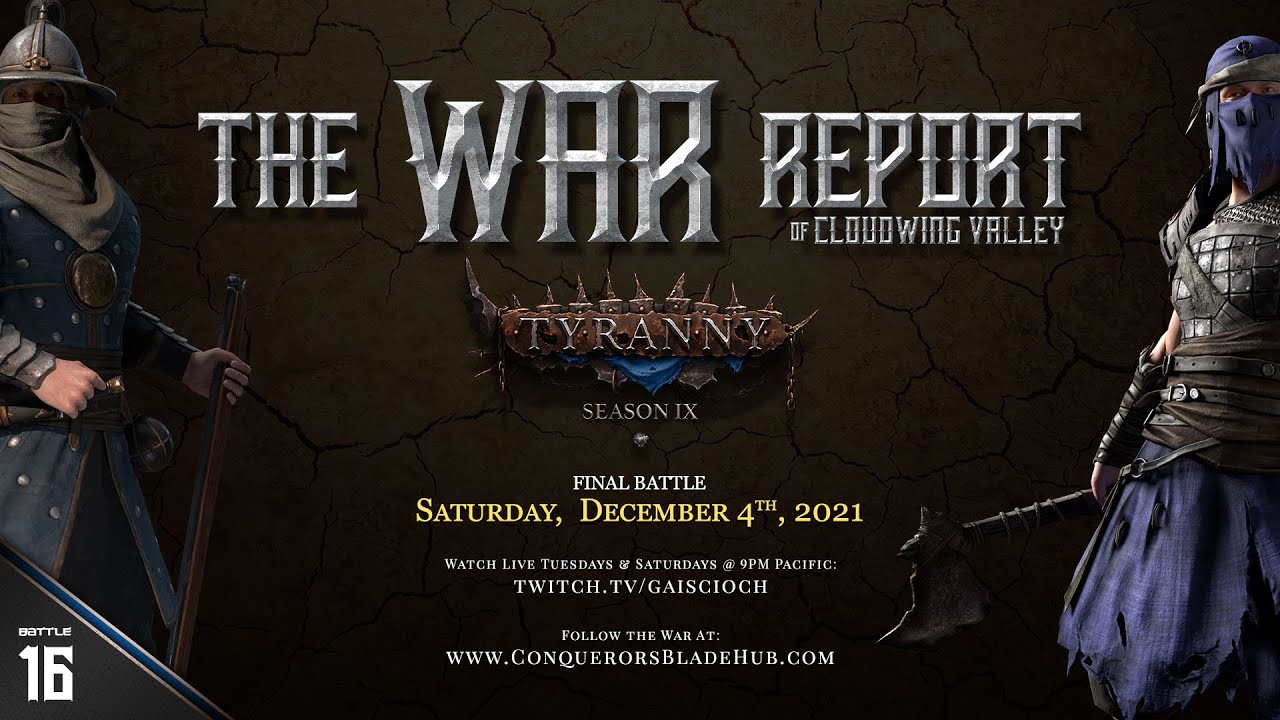 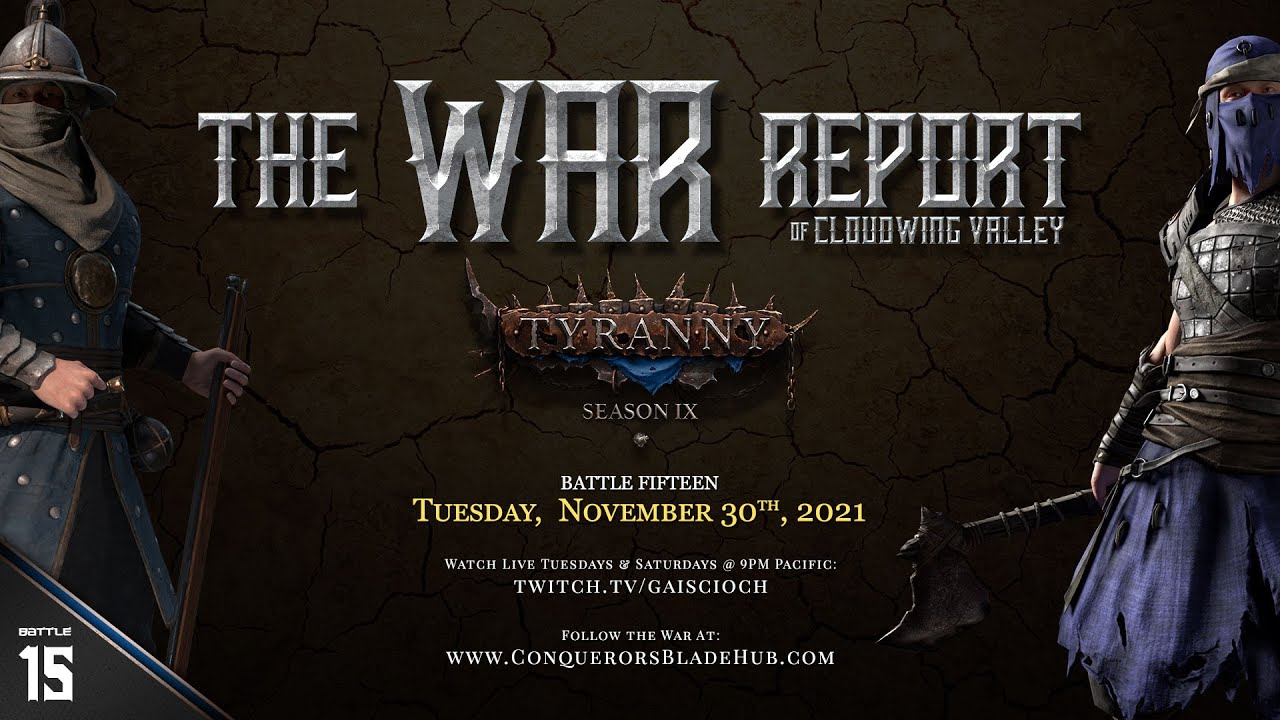 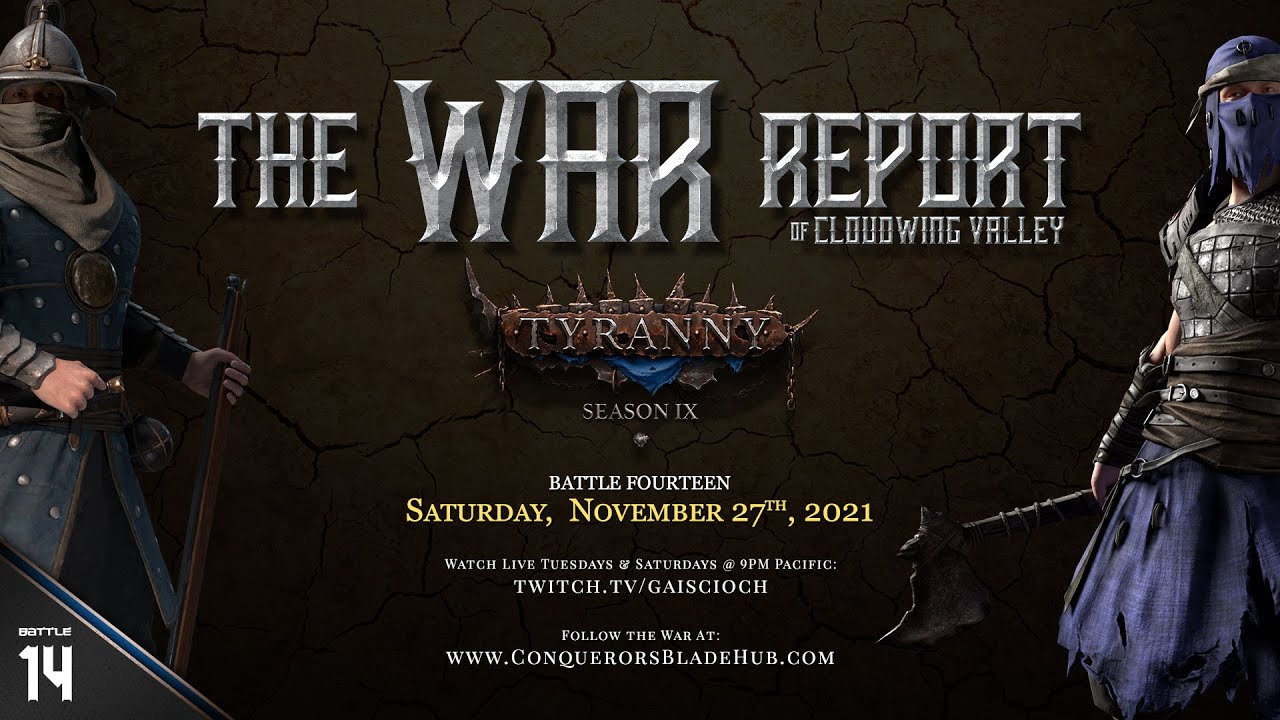 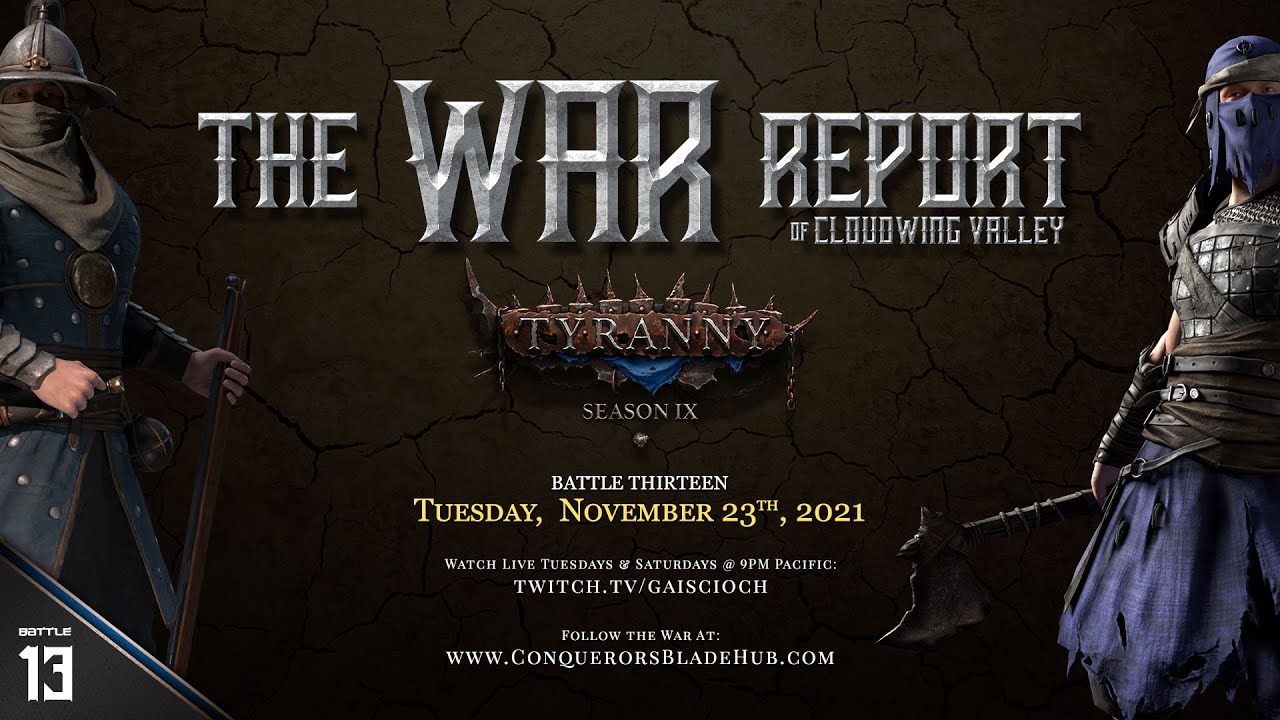 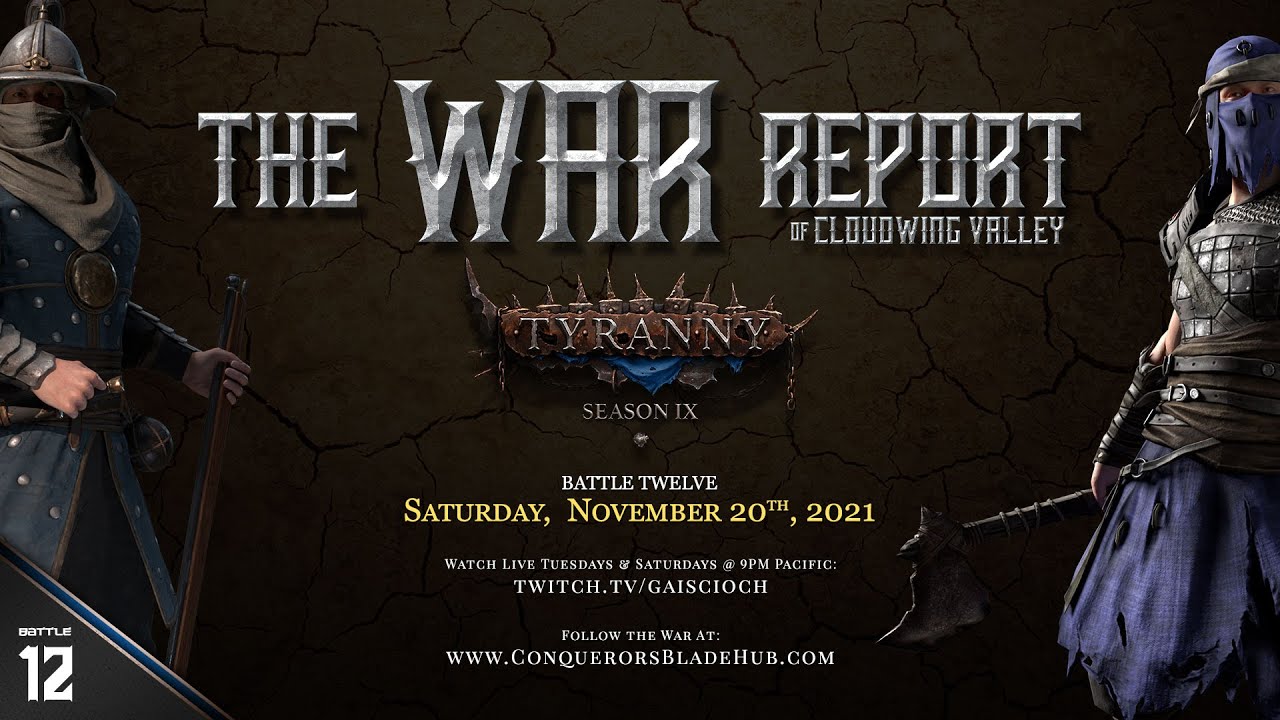 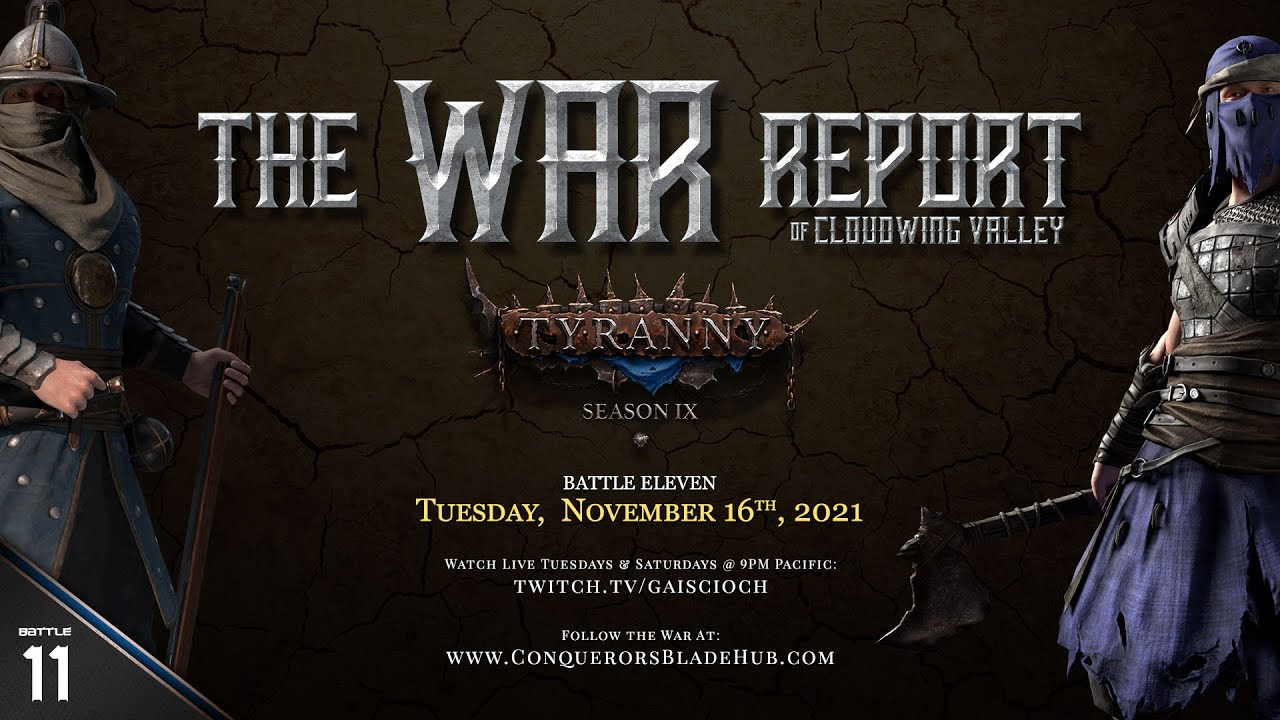 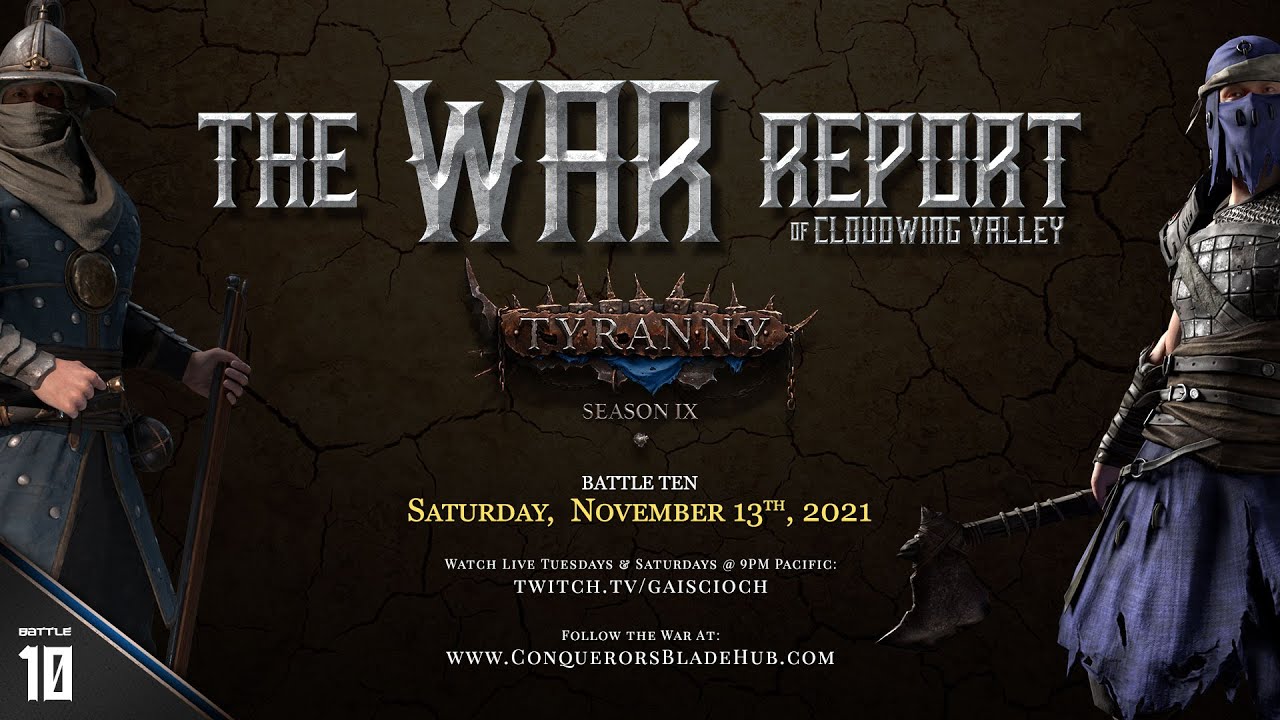 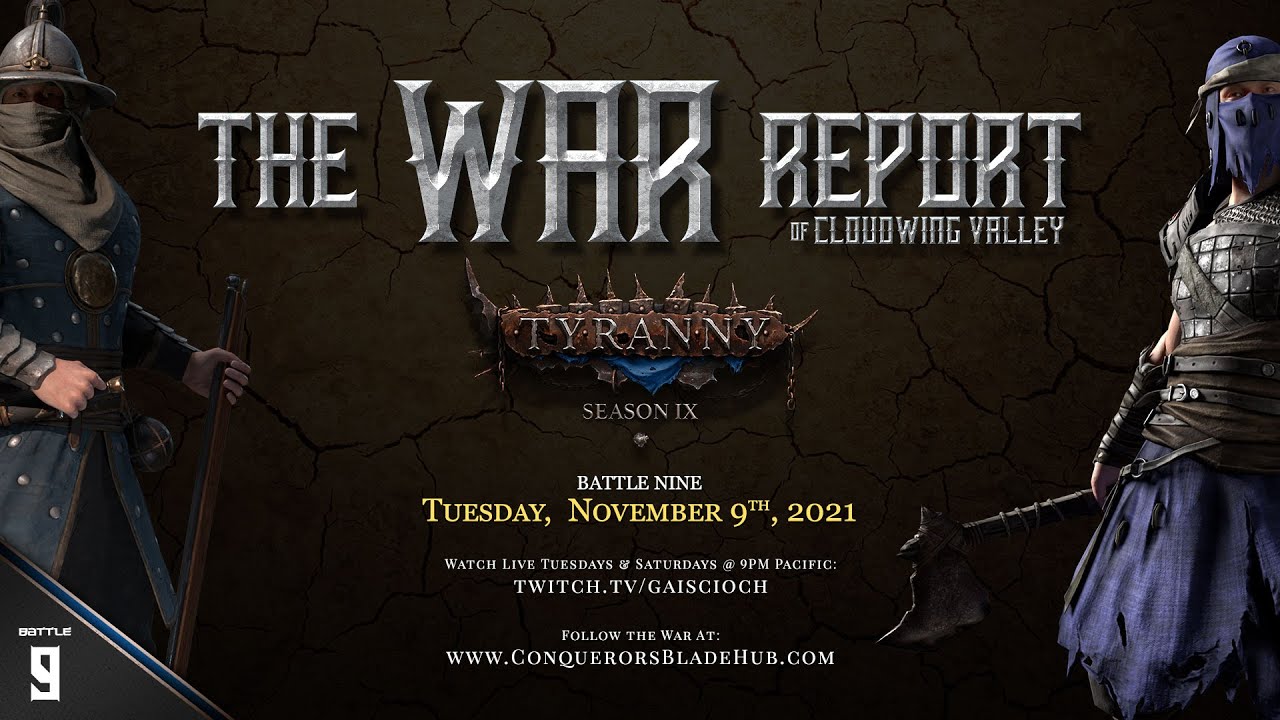 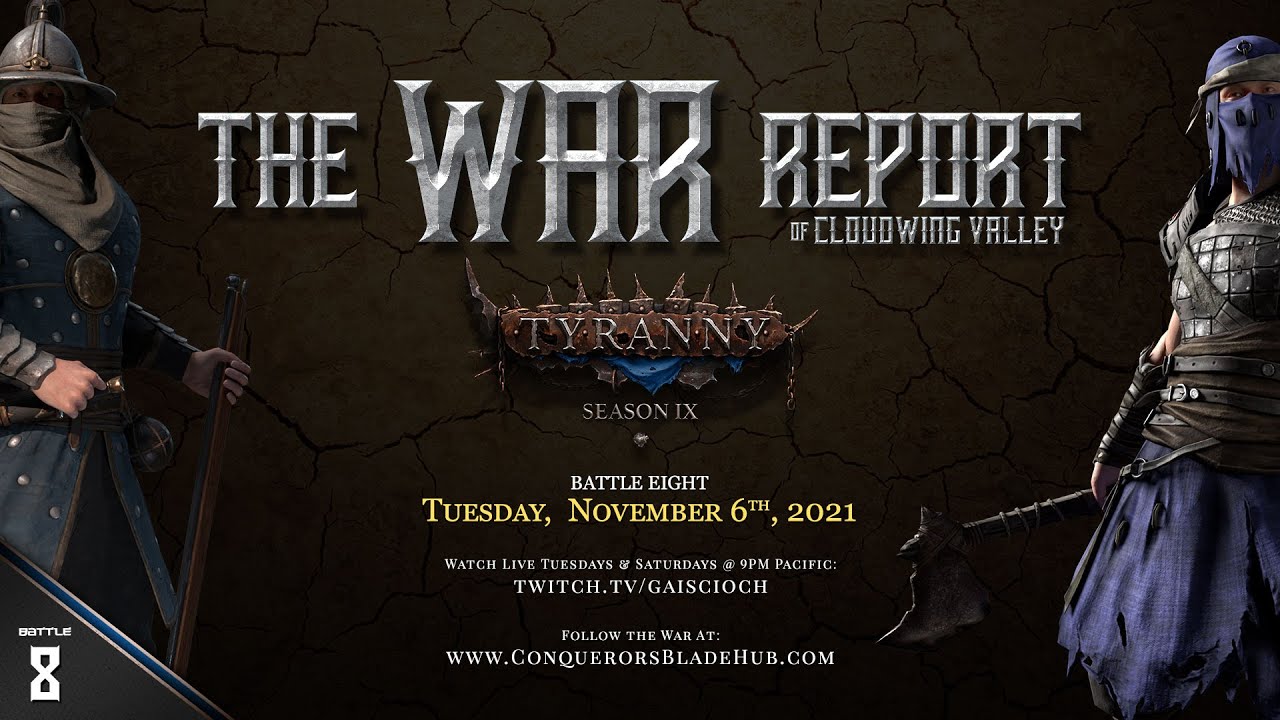 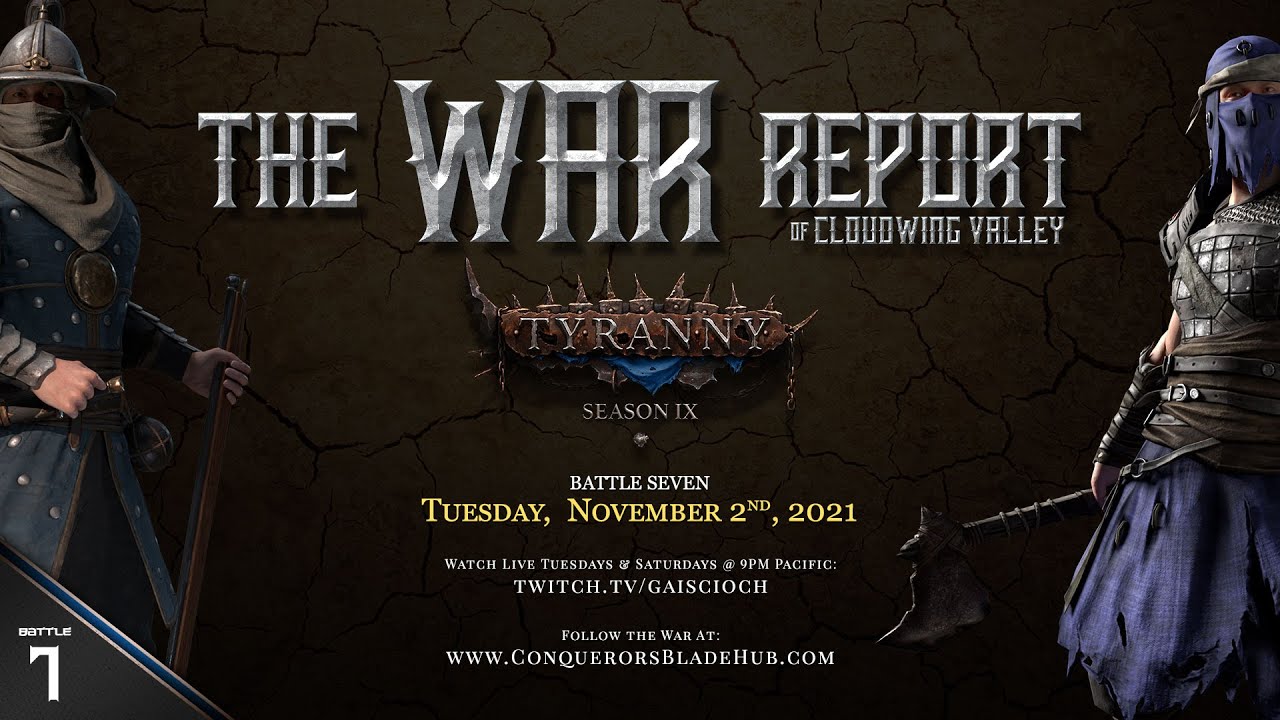 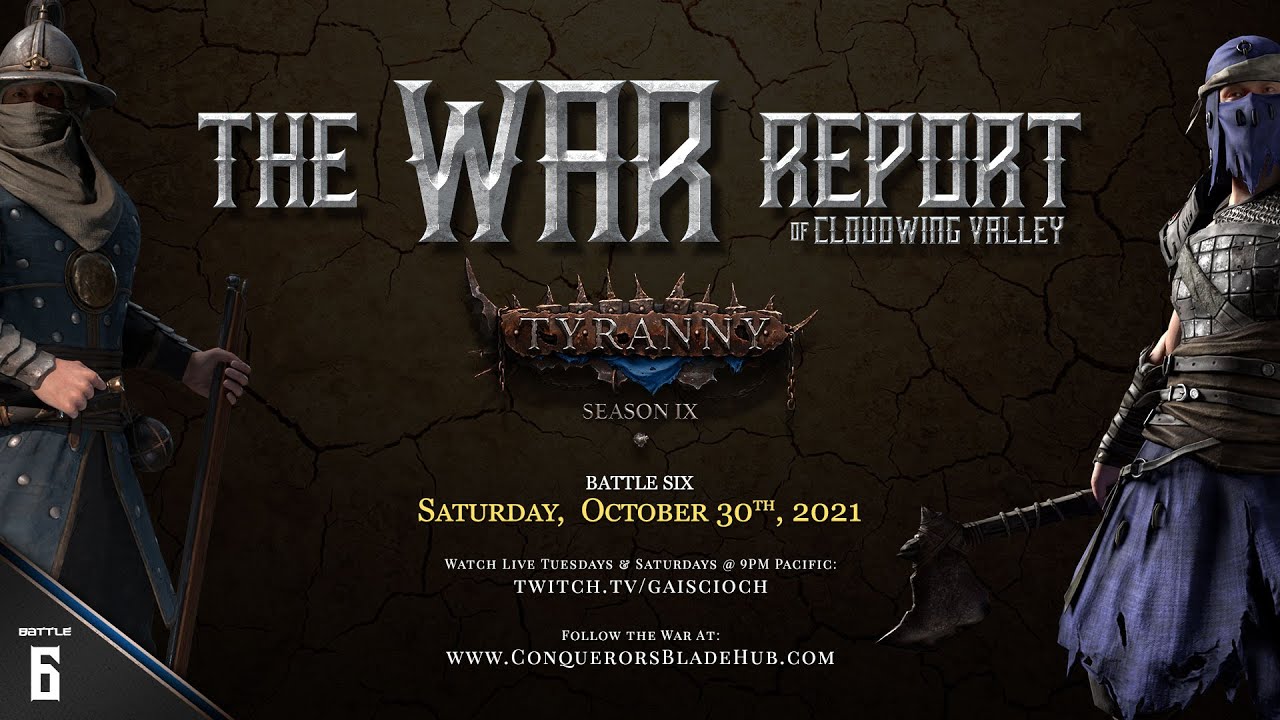 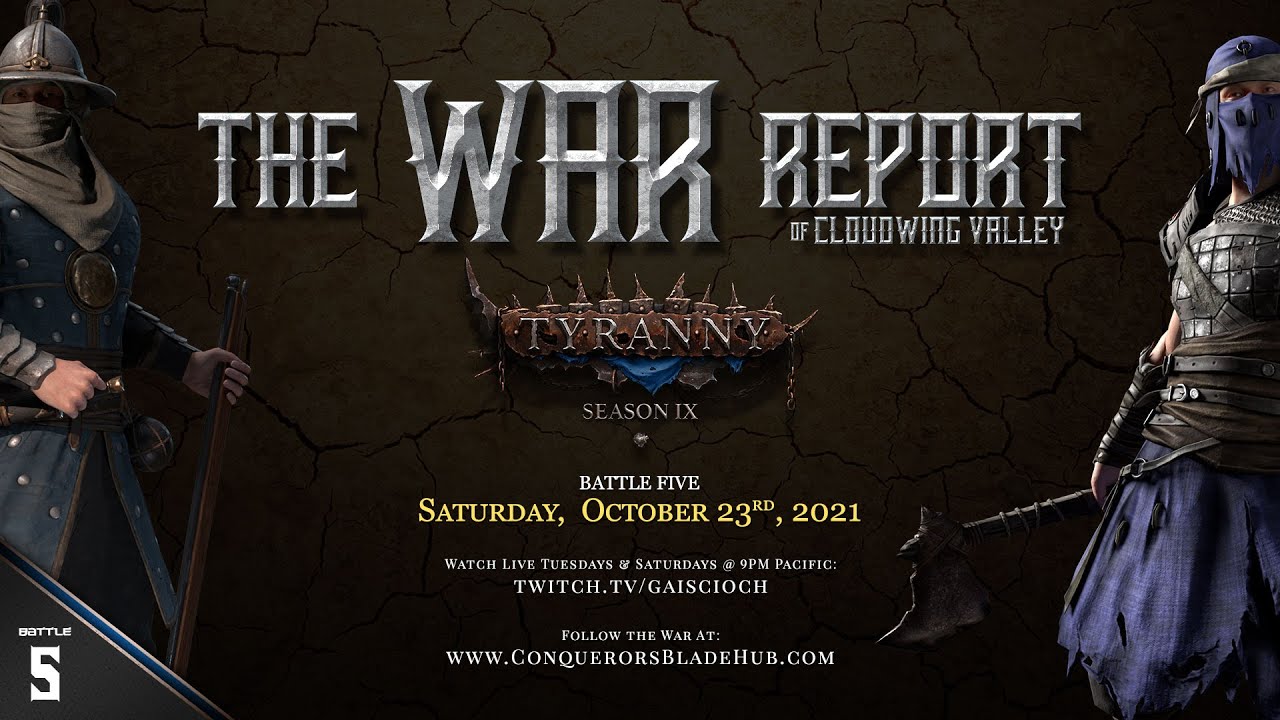 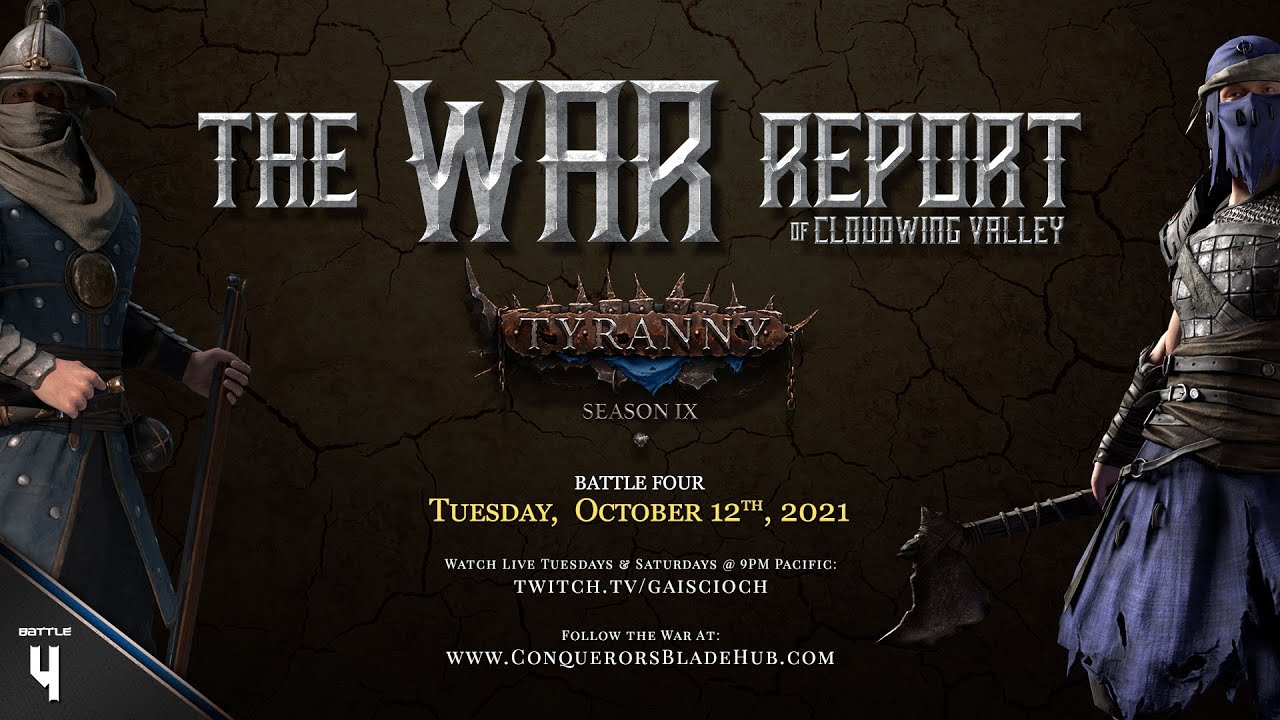 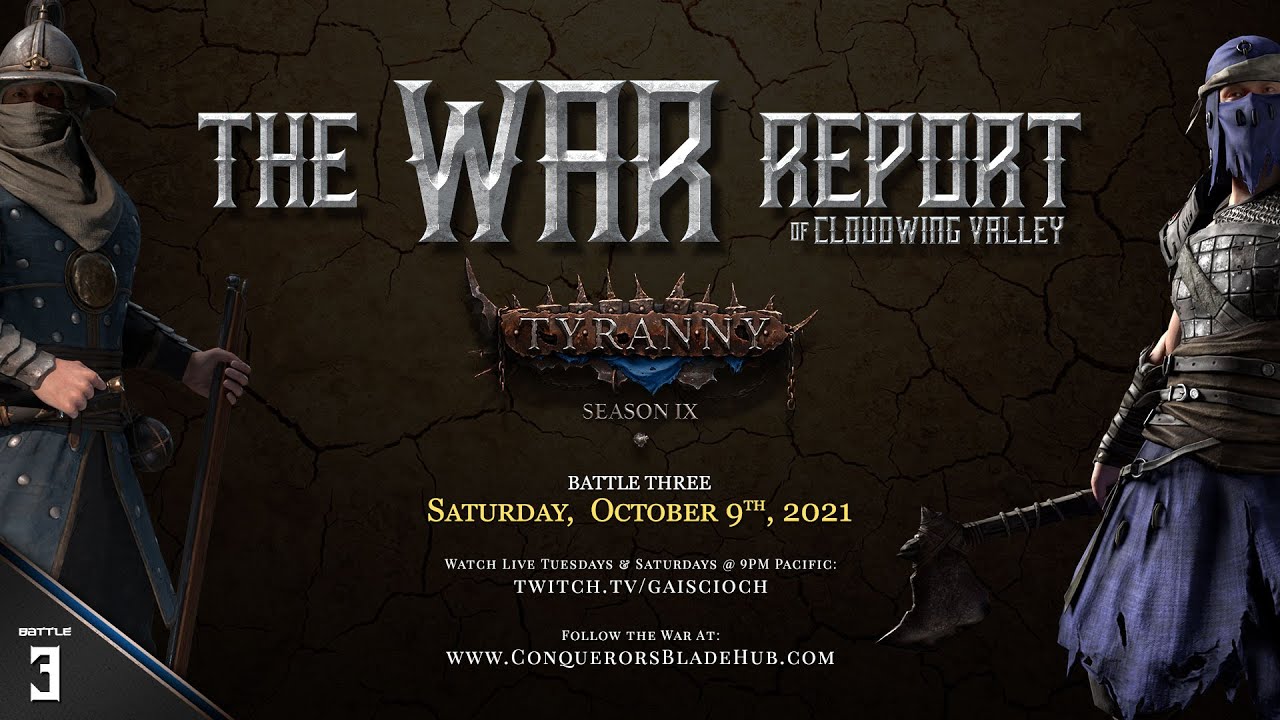 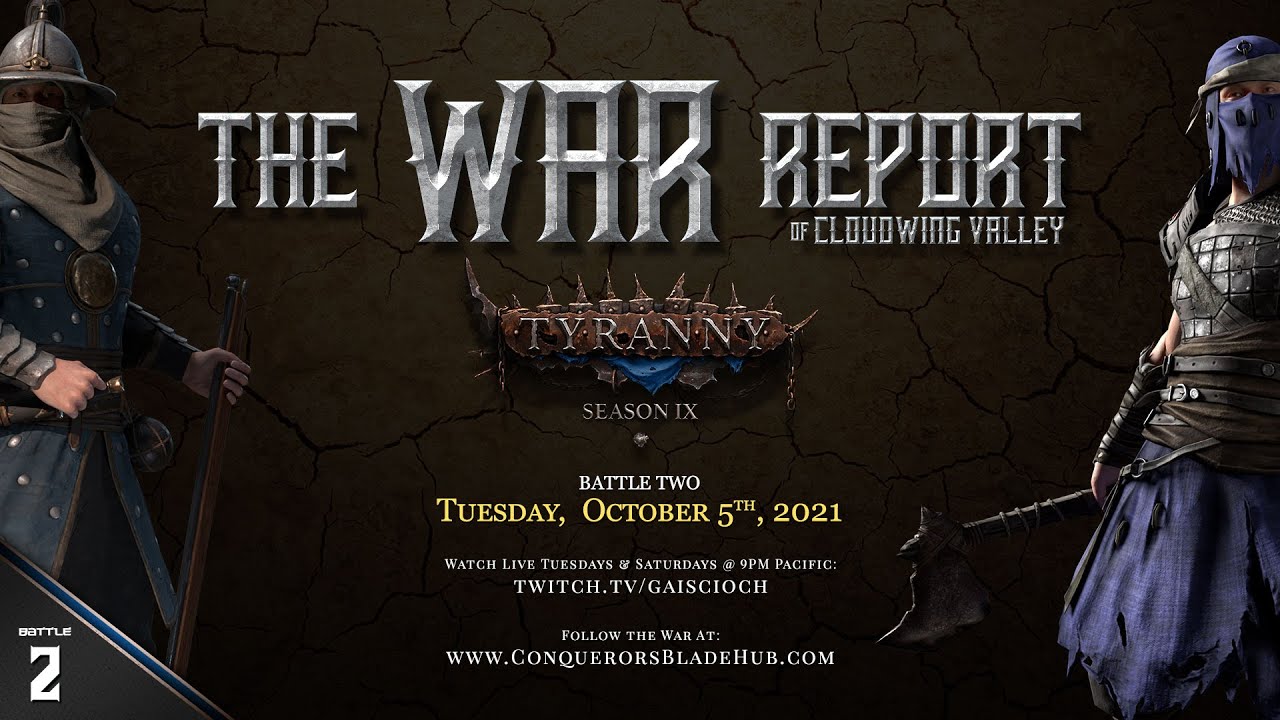 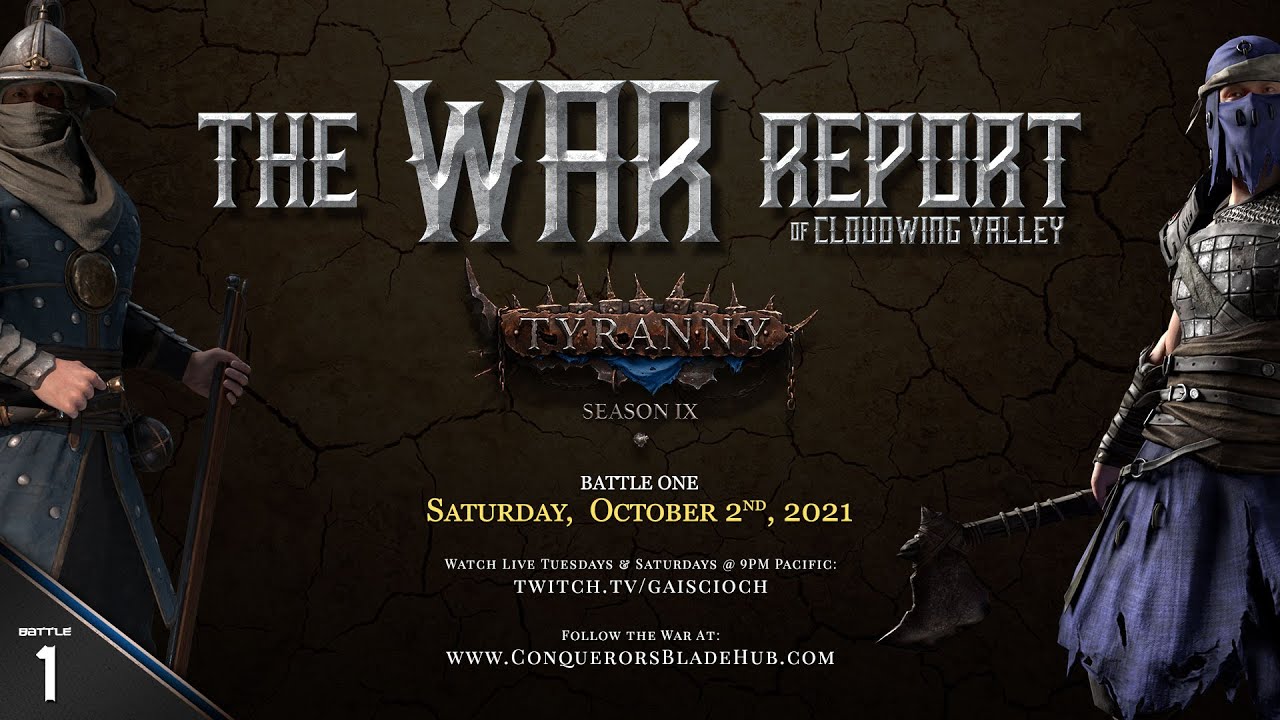