As the mighty Kingdom of Loegria encroaches on the boundaries of the Highlands to the north, the bitter rivalries between the Highlands’ clans must be put aside to fight for the greater good and end a centuries-long conflict in the thrilling new Seasonal Campaign. Begin your journey in the Conqueror's City in the heart of the Borderlands, then venture out to complete new Stages, hone your forces alongside your House in twice-weekly Territory Wars, and prepare for a final showdown at Turul Város at the end of Season X!

Freedom is calling. Recruit warriors from the far reaches of the Highlands and unlock three new Seasonal Units comprised of the bravest and best the realm has to offer. Band together with your kinsmen and draft the following Highlanders throughout Season X:

The sons and daughters of the Highlands have answered the call to fight for freedom, and three brand-new Seasonal Units are coming to Season X: Highlanders. The first of these new Units brings a brand-new battle mechanic to the fray: the Bagpipers (3-Star).

Historically, the bagpipes were so feared as a “weapon of war” that they were classified as such until as recently as 1996. To Scottish armies of old, bagpipes were more than just an instrument—they were a political symbol, marching their men into harm’s way to a glorious melody in the pursuit of freedom. Pipers were even stationed at the Battle of Waterloo as part of the 79th (Cameron Highlanders) Regiment of Foot, and their music reinforced the resolve of the regiments.

While some may think of bagpipes as an instrument of torture due to their loud and sometimes grating blares, they certainly intimidate enemy forces and were carried and played by ancient Scottish clans of old to do just that. In Conqueror’s Blade, the Bagpipers will carry on this rich history of political symbolism, intimidation, and uplifting performance.

Perhaps now thought of as reserved for royal ceremonies, funerals, and Hogmanay, the bagpipes remain a staple of Scottish culture, and their tradition is kept alive to this day.

The first unit of their kind in Conqueror’s Blade and our foray into bard-type mechanics, the Bagpipers provide stirring martial music as they march into battle alongside the Highlander armies, bolstering morale and the fighting spirit of the men.

While they may not be equipped with conventional weapons such as broadswords or spears, the Bagpipers have their own unique way of carrying their troops to victory—buffing their allies’ attacks with inspiring melodies. The music of these defiant men makes such a difference to the Highland units in battle that the Loegrians have forbidden the playing of their tunes wherever they can, deeming the sound of bagpipes to be an incitement to insurrection.

Recruit warriors from the far reaches of the Highlands when three brand-new Seasonal Units arrive in Season X: Highlanders. The second of these new Units is a heroic band of greatsword-wielding warriors: the Claymores (4-Star).

Originating in Scotland and brandished in battles between 1400–1700 by Highland Scots, a claymore is often referred to as The Blade of Scotland. The unique weapon was created in the early Renaissance period, and the name is derived from the Gaelic word “claidheamohmor”, meaning “great sword”. The word ‘greatsword’ is attributed to any two-handed double-edged sword, whereas a ‘claymore’ is the term for the similar yet basket-hilted blade historically used by Scottish Highlanders.

While greatswords are often cumbersome due to their immense size and weight, the claymore had ample slashing power and, in close quarters, could hack through an enemy formation like a hot knife through butter.

In Conqueror’s Blade, the Highlander clans march into battle at the side of their chieftain, and there is no greater honour that can be bestowed upon a soldier than to be entrusted with one of the prized claymores; forged by the most skilled swordsmiths in the land and capable of cutting through steel mail and flesh alike.

Going all-out with every attack, the Claymores make excellent shock troops by charging into battle, gaining defence as they attack. The enemies of the clans dread conflicts where they must face these fearless warriors, particularly after the Battle of Gallows Hill, where thirty claymore-armed warriors held off many times their own numbers in the face of a furious barrage from the Loegrians.

Clans will be united, and history will be made as three brand-new Seasonal Units arrive to fight for freedom in Season X: Highlanders. The last of the troops to answer the call to freedom is the Houndsmen (5-Star), the first Unit of its kind.

What could be better than charging into battle with a fiercely loyal companion? Less man’s best friend, and more “man’s best killing machine on four legs”, canines have been used throughout history in both hunting and warfare.

With gnashing jaws and slashing paws, dogs were used to break up enemy formations in war before their human counterparts were sent in to attack, using the chaos to their advantage.

In Scotland, inscribed stones have been found to show mounted hunters accompanied by dogs, proving that there is no greater friend in battle than a fluffy one for the people of the Highlands.

In Conqueror’s Blade, hunting with hounds is among the many peacetime pursuits of the Highlands nobility. Those with superior hunting prowess become the dedicated master of the hunt for their clan. The Houndsmen themselves are kennel masters—responsible for keeping the hunting grounds safe from poachers and Loegrian intruders. The Highlanders’ enemies consider the use of dogs in battle to be an underhanded tactic, most likely because of the high levels of success these attacks tend to enjoy.

Armed with bows, the Houndsmen have mid and long-range precision archery damage at their disposal, as well as their deerhounds to deploy for savage melee encounters.

The hound is as loyal to its hunter as the hunter is to his hound, and their close relationship extends to a loyal bond on the battlefield. As both fight, the damage they deal increases, and the dogs will never leave their side. When a hound is struck down, the hunter will unleash his full force on the enemy to avenge his fallen companion.

Freedom is calling as Season X: Highlanders nears in Conqueror’s Blade! Answer the cry by pre-purchasing the Season X Battle Pass to earn exclusive in-game rewards now and as soon as the new season launches on December 21.

Highlanders can earn over 100 levels of rewards from the Battle Pass in Season X: Highlanders, including all-new and exclusive cosmetics, Emotes, currency to exchange for new Weapon Skins, and so much more. The ultimate reward sits at Tier 100—the Laird of the Isles Hero Attire. You’ll also receive the Clan Chieftain Hero Attire straight away when you activate your Battle Pass on December 21!

Unlock Blades from the Battle Pass to exchange in the Seasonal Store for Highland-themed weapon skins and Antique variants of Season VI: Scourge of Winter Battle Pass attire.

For more information on Conqueror's Blade Season 10 take a look at the Patch Notes or visit https://conqblade.com/en/seasons 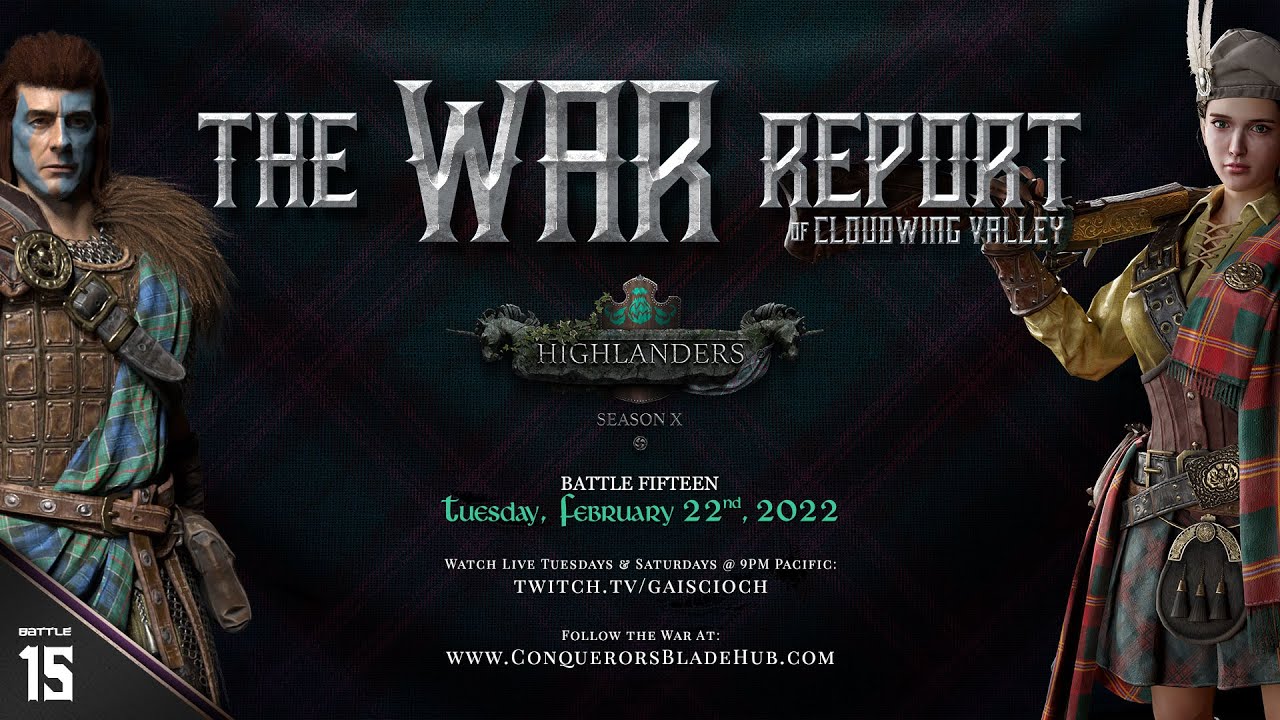 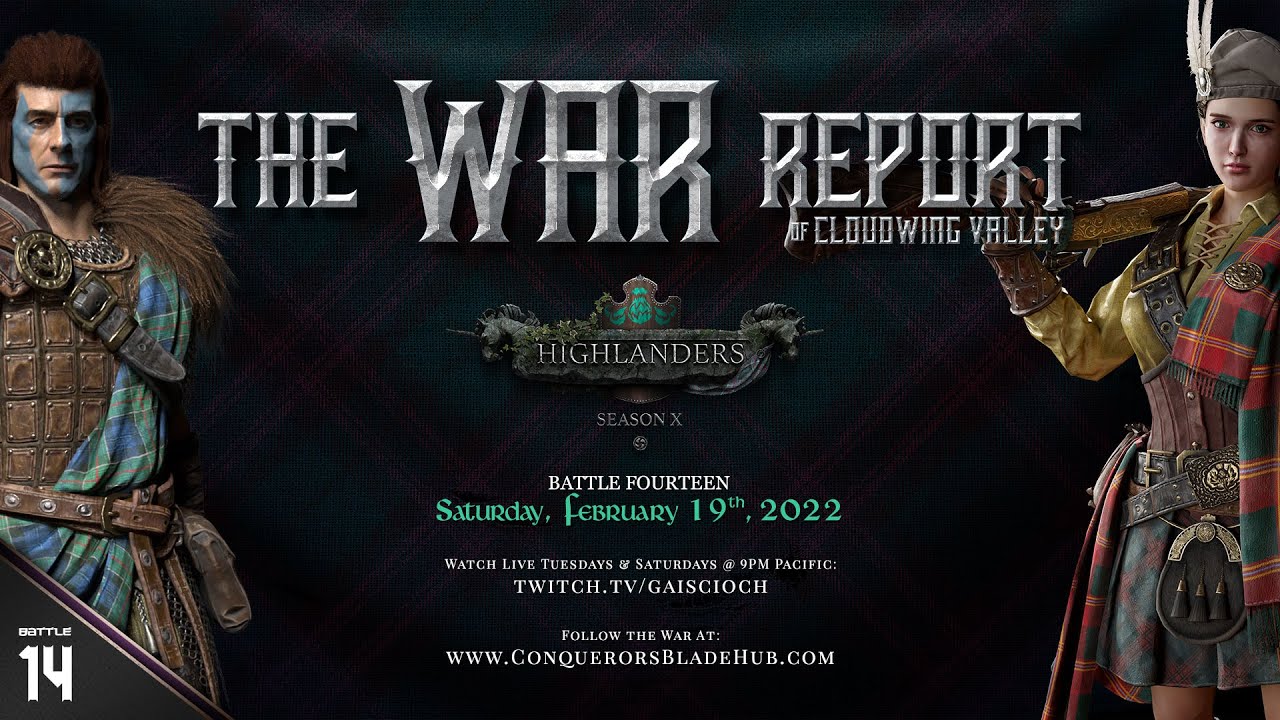 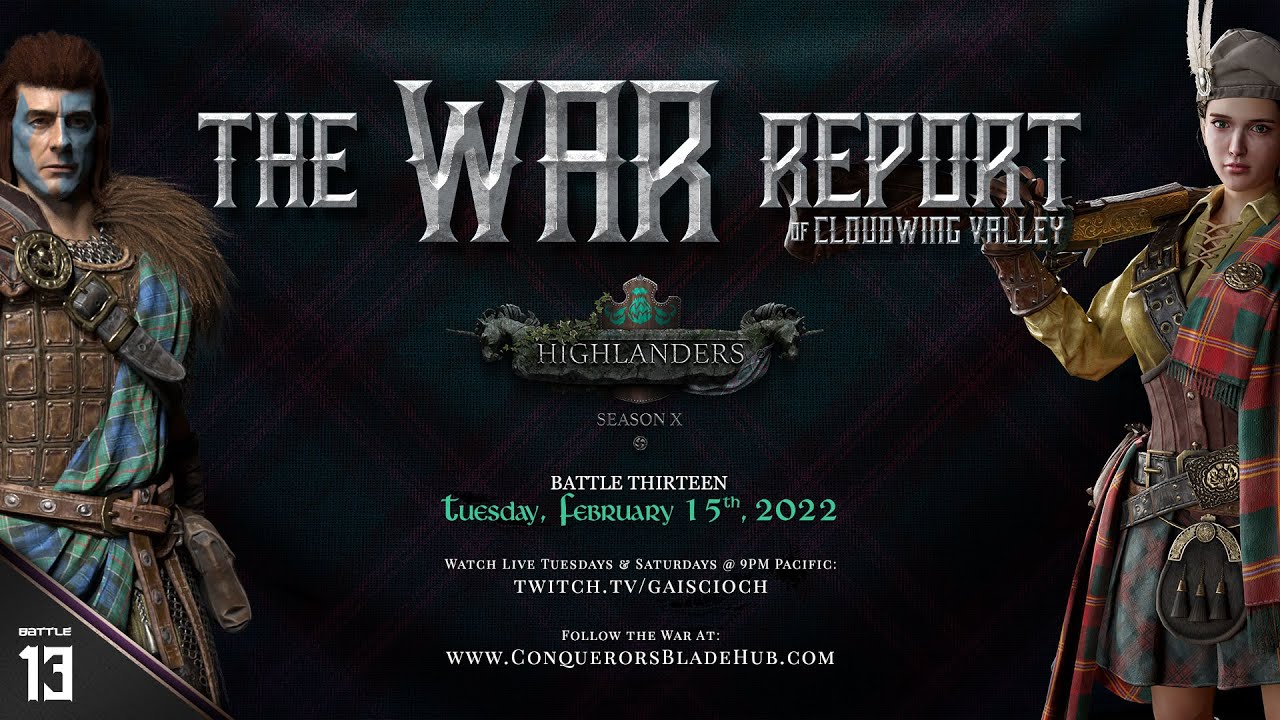 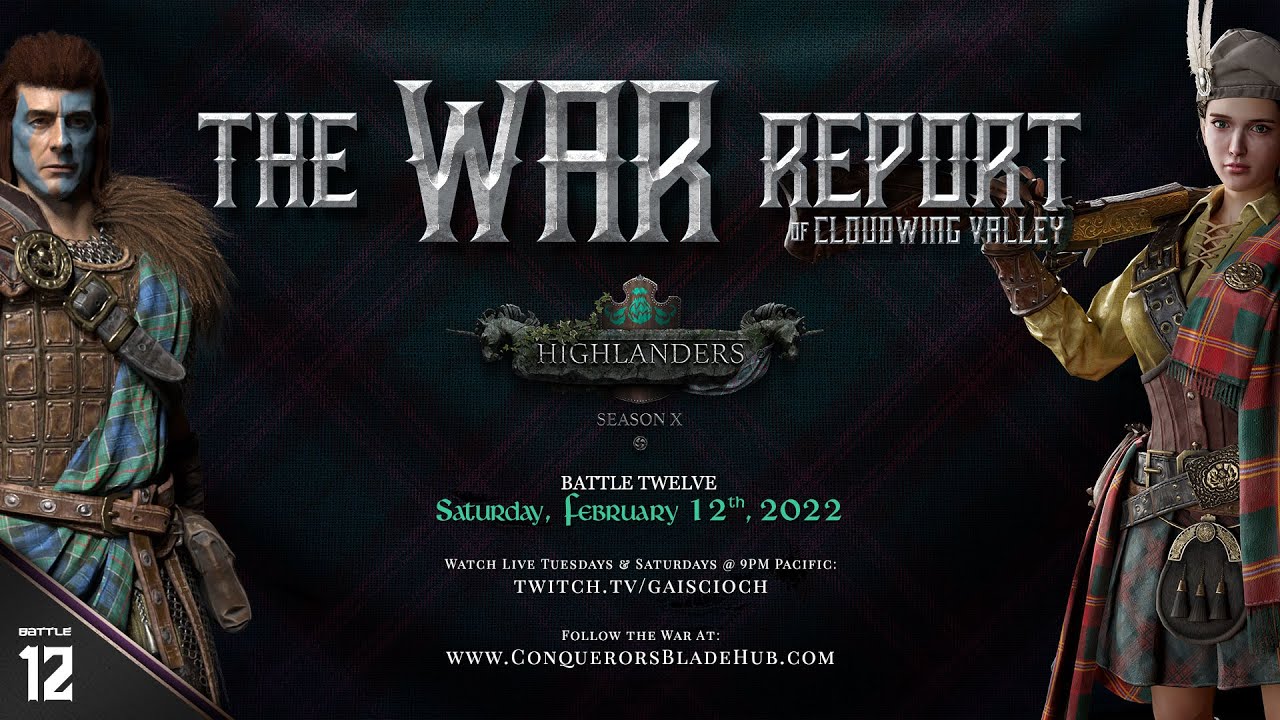 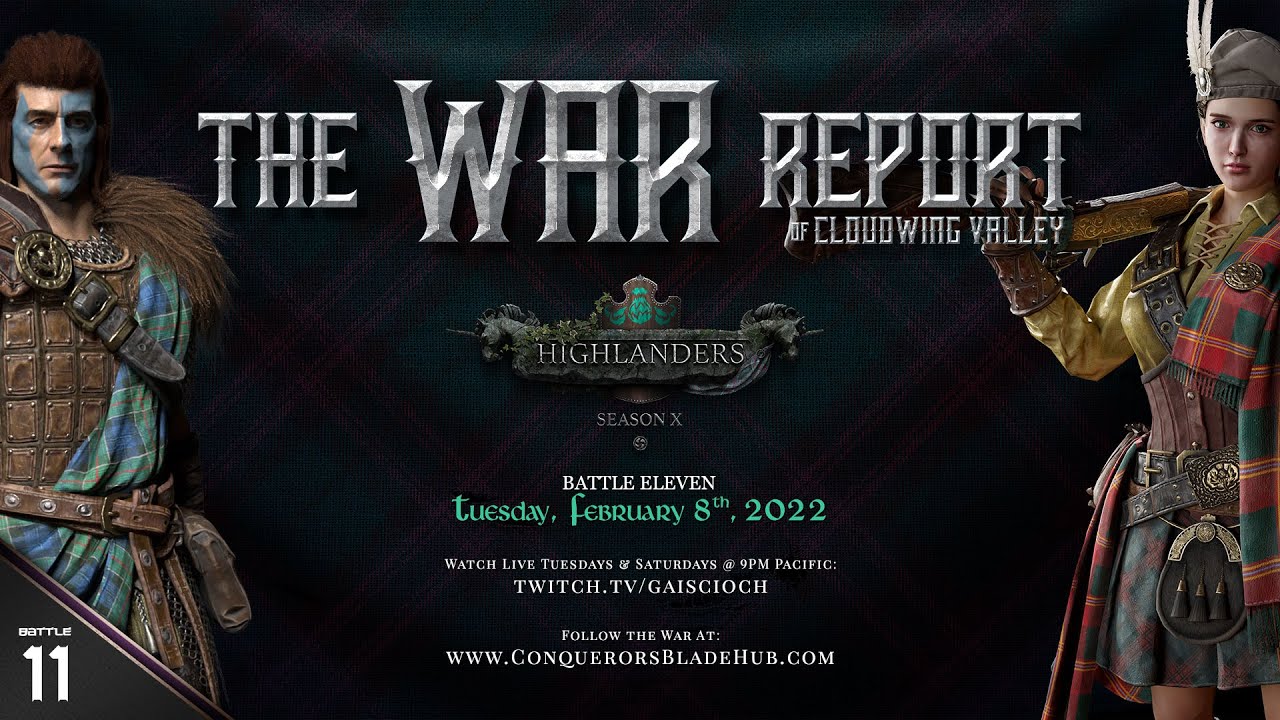 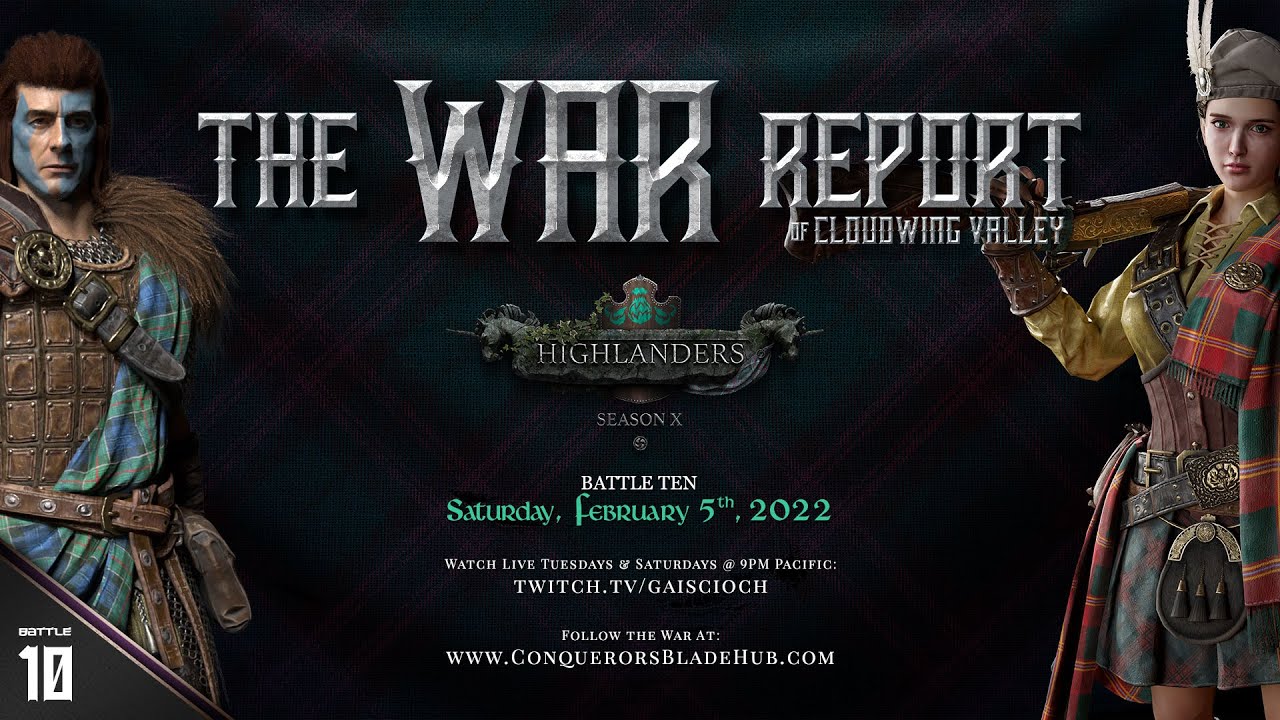 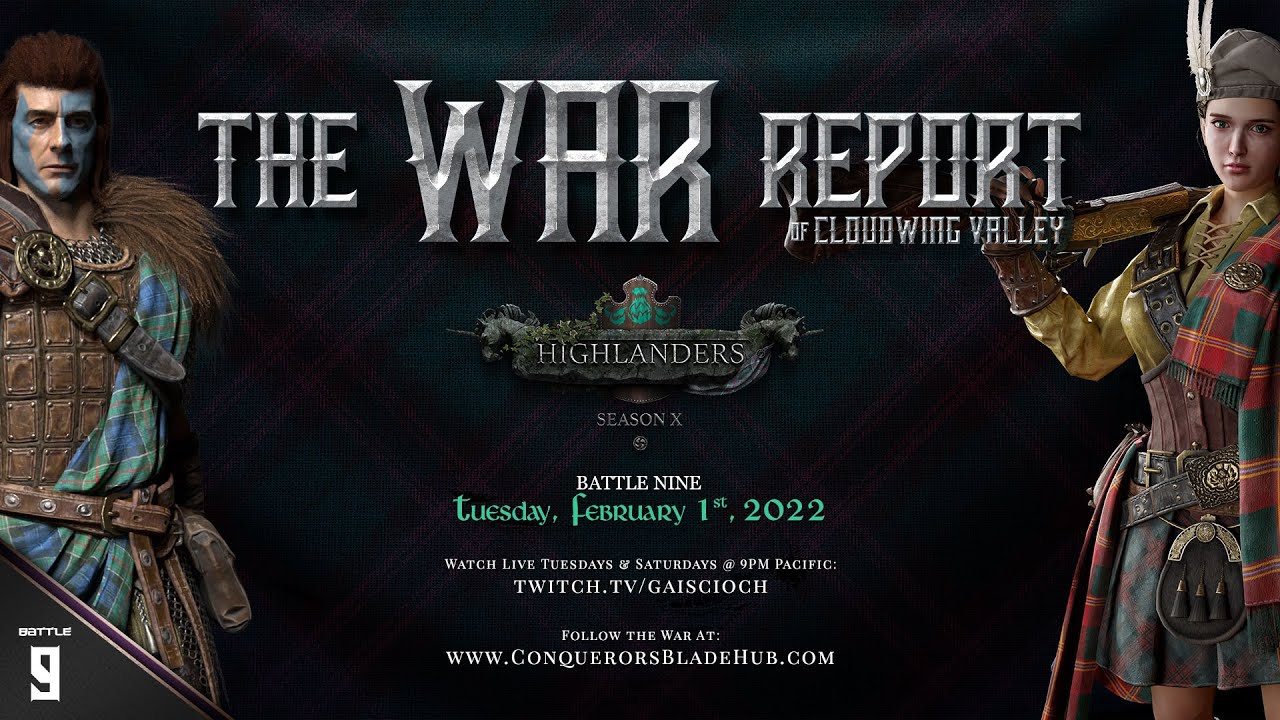 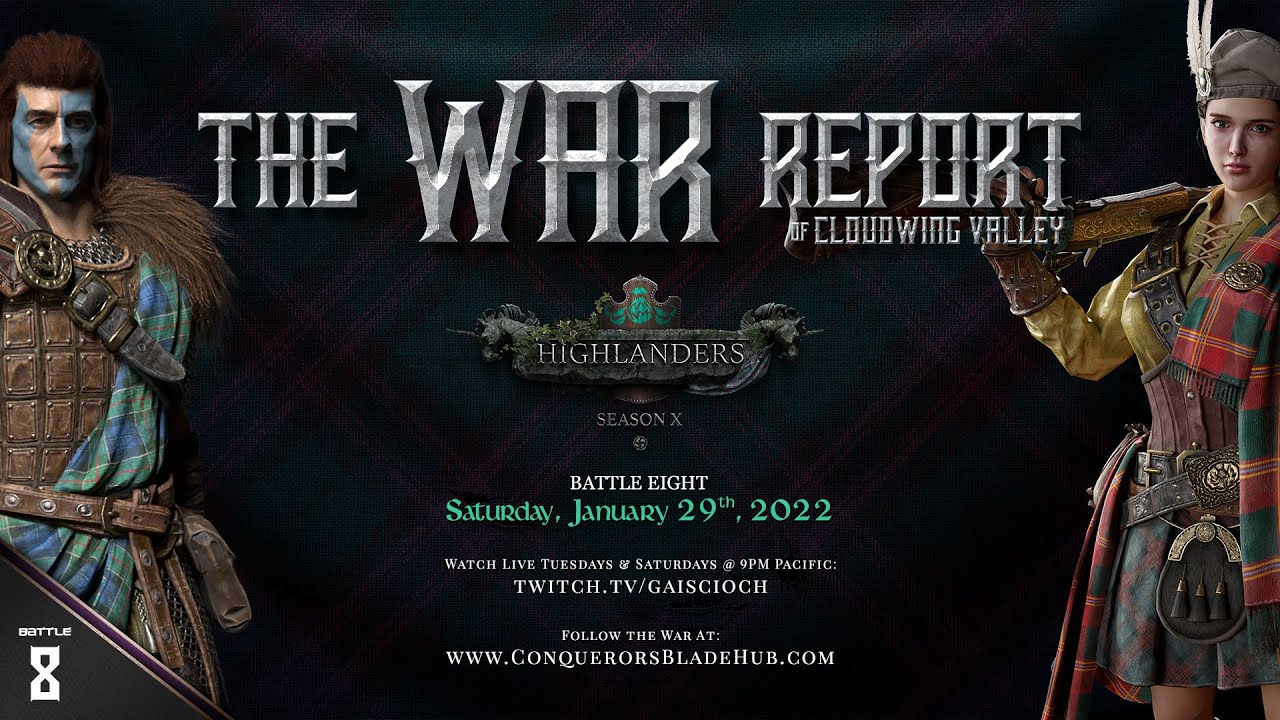 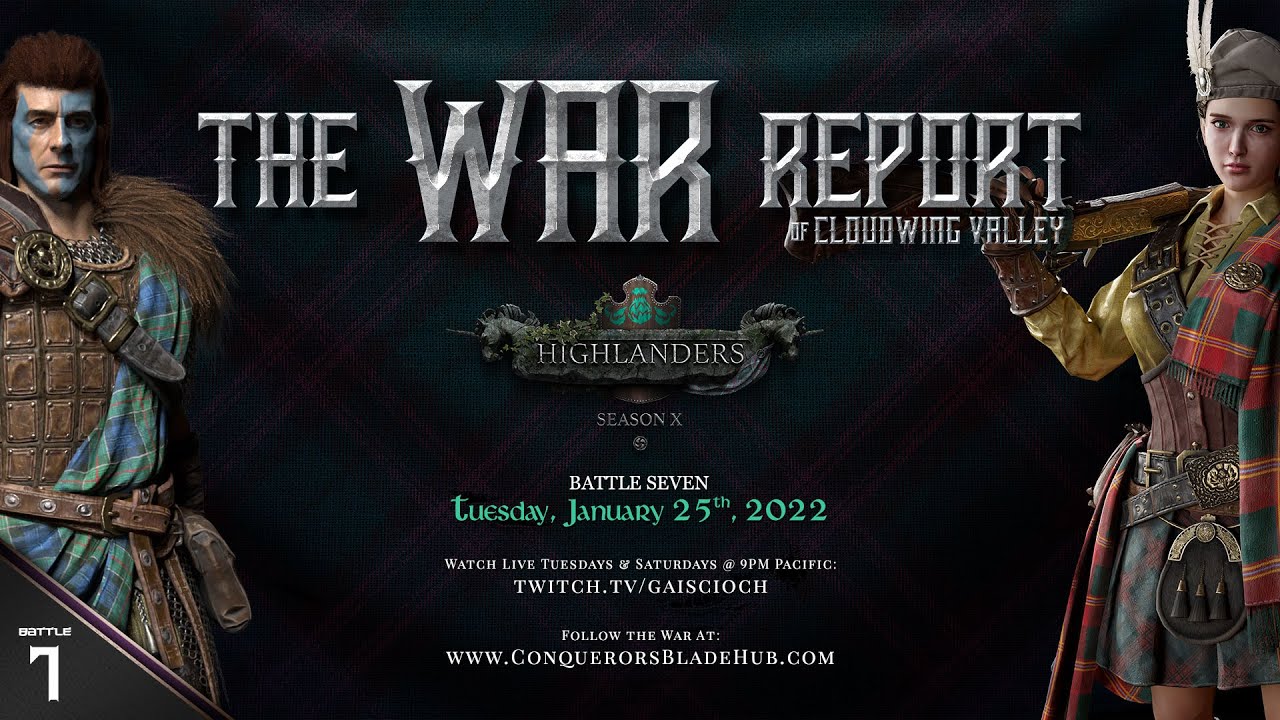 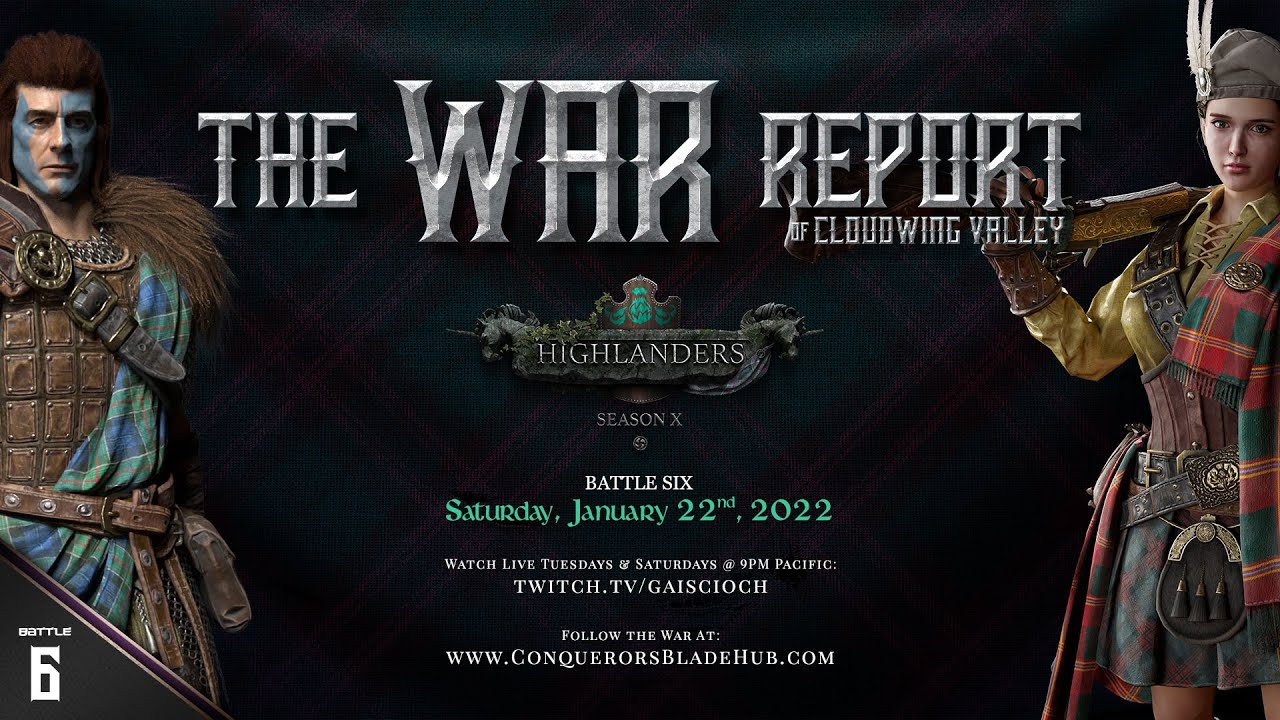 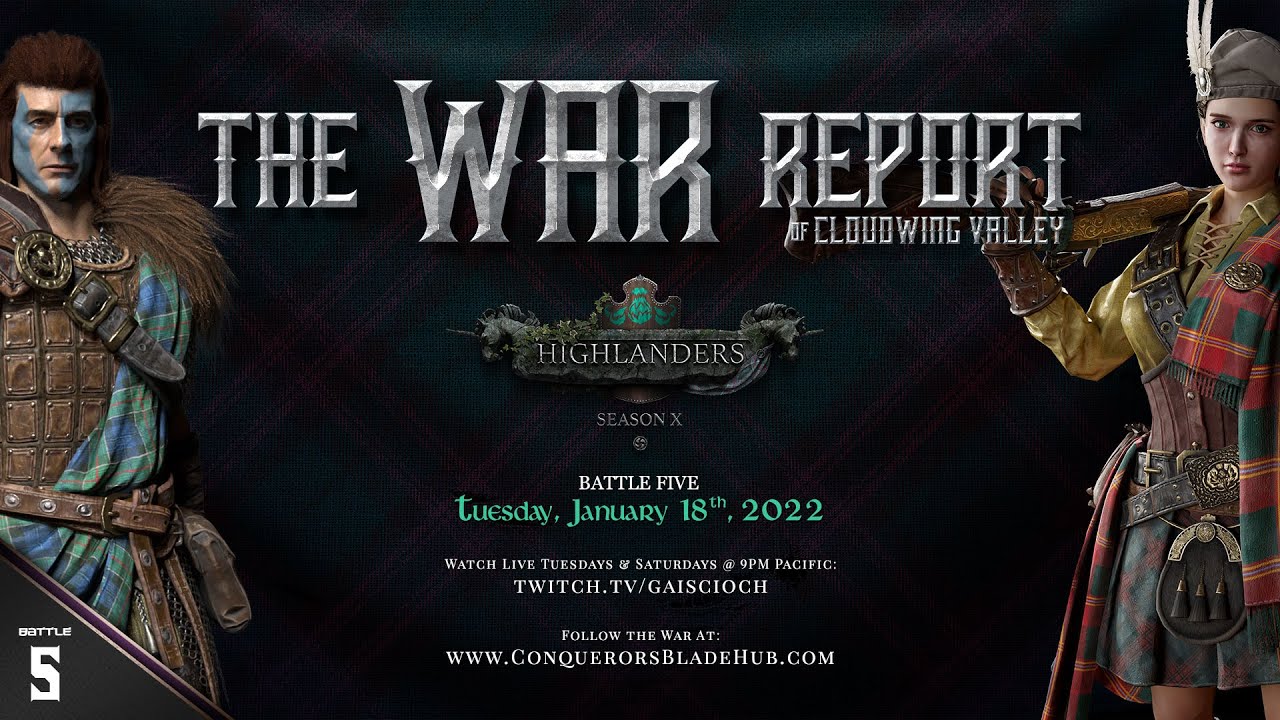 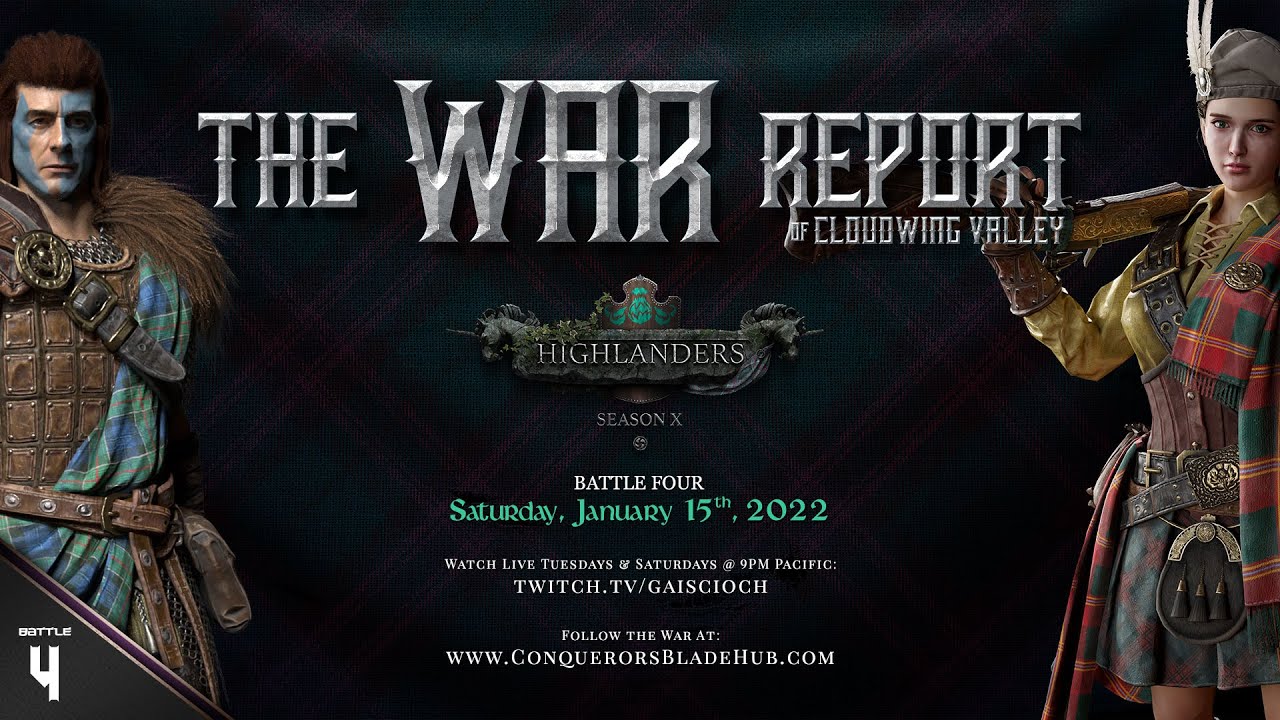 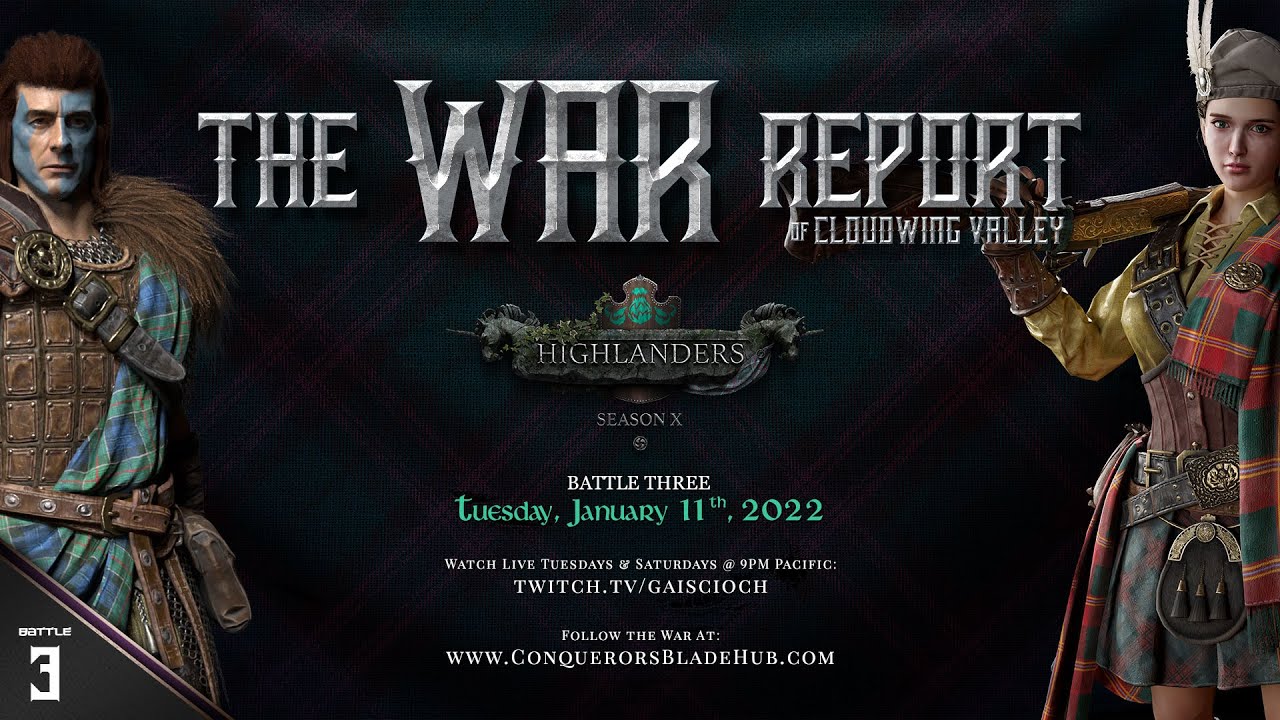 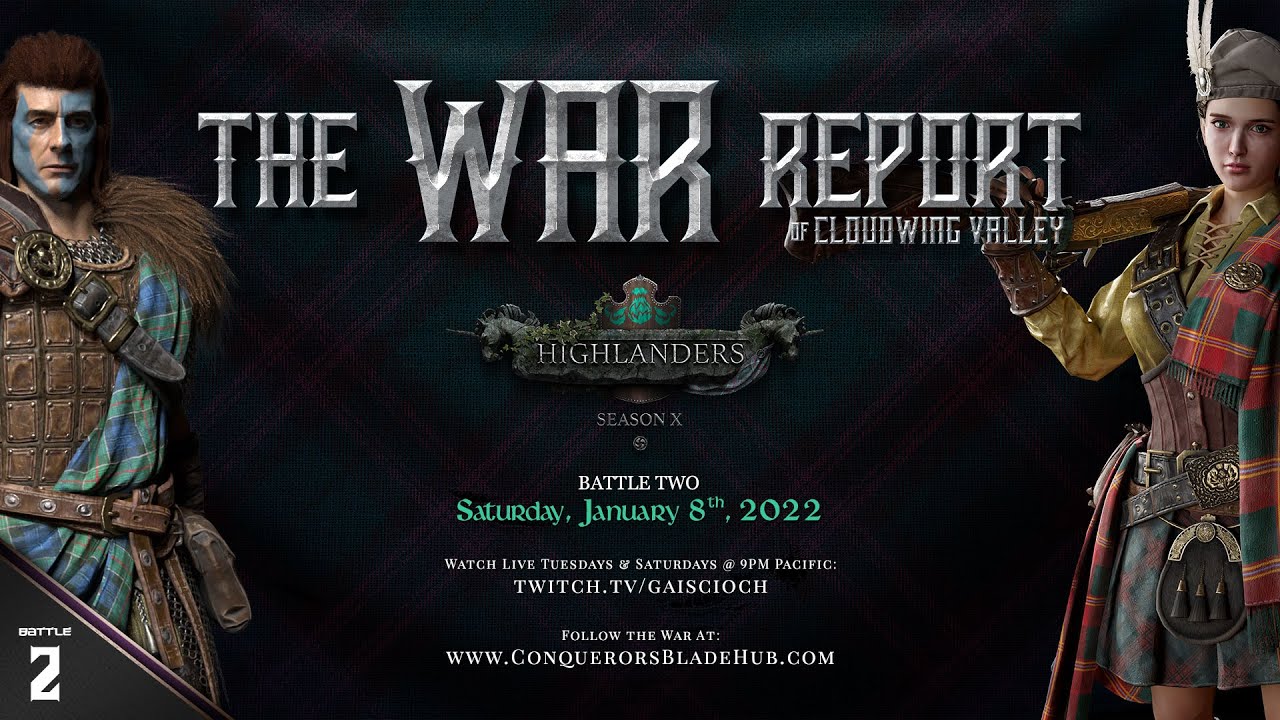 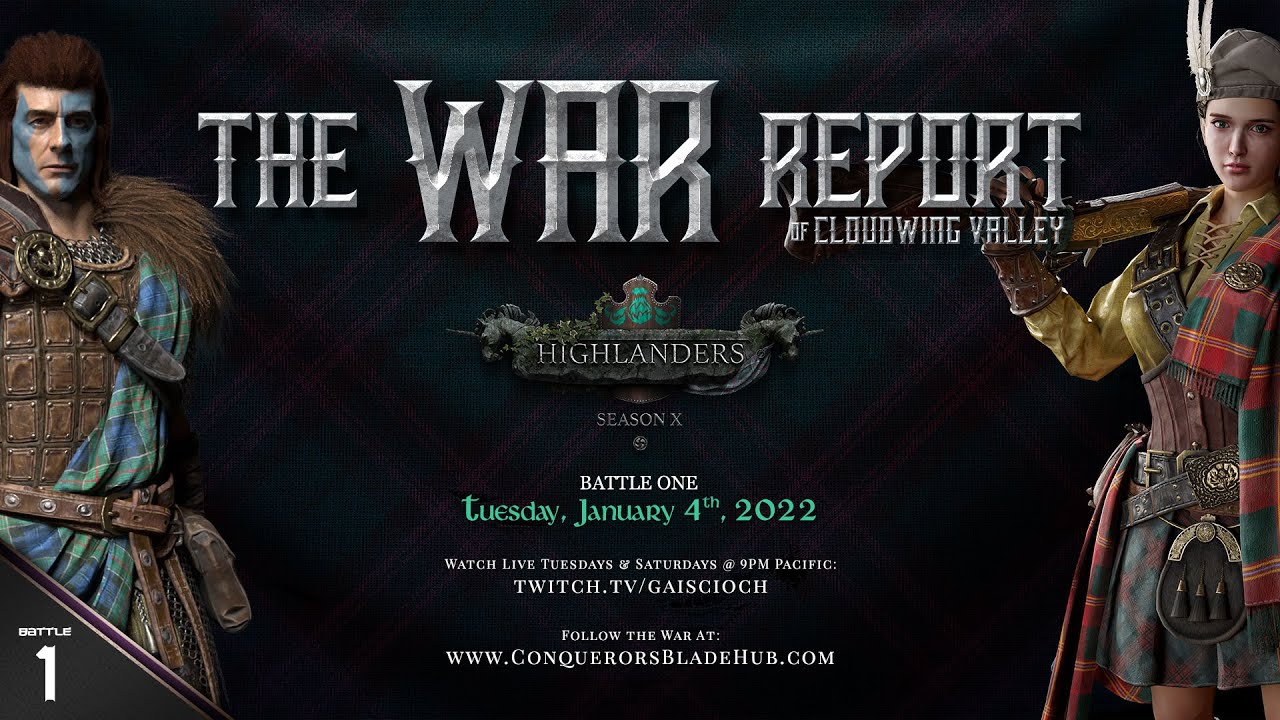